Acting like we belong down here, know what I’m saying?–D’Angelo

F. Scott Fitzgerald’s The Great Gatsby is one of the clearest literary influences for The Wire. I teach literature, so I will grant that I am inclined to see correspondences with the books that I teach everywhere I look, but in this case, I can defend it pretty easily. The Gatsby connection informs the character arc of Season 3’s tragic hero, and it is explicitly discussed by another character in Season 2. But you can go all the way back to Season 1, Episode 5, “The Pager,” to see the first brilliant example of the way The Wire grapples with the fundamental challenges of the American dream that were introduced so compellingly in Gatsby.

One of the things that makes Gatsby such an enduring classic is the way it dismantles the American myth of the “self-made man.” The poor farm boy, James Gatz, recreates himself into the mysterious playboy, Jay Gatsby. He manages to maintain this illusion throughout one long summer, before the whole house of cards crashes down on him. 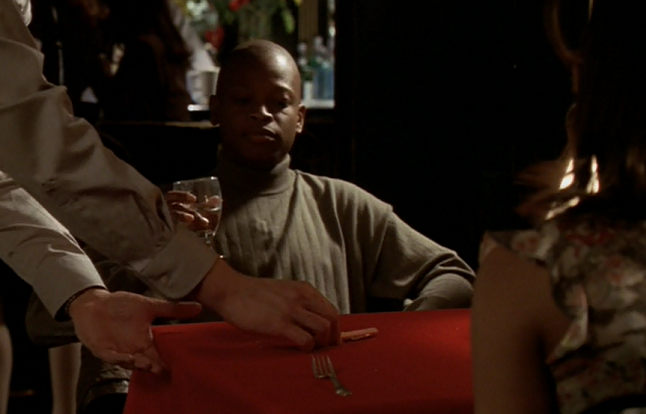 D’Angelo Barksdale may not reach Gatsby’s grand heights of luxury and decadence, but he experiences all of the emotions of this rise and fall during the course of one uncomfortable date in a classy restaurant. It is a credit to D’Angelo’s self-awareness that he is able to perceive something that Gatsby never understands, and yet, perhaps there is a certain salvation in Gatsby’s fantastic ignorance.

Friday night is date night for D’Angelo and his girl Donette. We see them enter the restaurant, with fashion-obsessed D’Angelo wearing a nice turtleneck sweater, ushering in Donette, who proudly sports a red fur coat and hair sculpted into an elaborate bouquet of curls.

They look ready for a nice night at a fine restaurant, but for D’Angelo, the indignities start the moment he walks through the door and they never stop. The host asks him if he has a reservation, and when D’Angelo stammers back “naw, I thought, you know, we could just walk in.” The host agrees to accommodate them. They are placed at a small table near the kitchen, and when D’Angelo asks for a better spot, the host says coldly “It’s Friday night. Those are for patrons who made reservations.” It is a demeaning response, one that puts D’Angelo and Donette squarely in the inferior group of patrons, the ones who didn’t know to call ahead.

To make matters worse, Donette turns on D’Angelo with a sharp glance when he passively accepts the table, and then chastises him when the staff finishes pulling out her chair and taking her coat (D’Angelo keeps his coat and pulls out his own chair). “You shoulda pushed him, Dee,” she scolds. And as if his manhood isn’t bruised enough, a passing waiter bumps his elbow.

When we return to the restaurant, dinner is over, but D’Angelo’s uncomfortable experience is still going strong. The waiter draws a crumb collector like a sword, and D’Angelo jumps as the man cleans up the crumbs scattered in front of him. The waiter informs D’Angelo that the device is “for the crumbs,” in a low-angle shot that heightens the man’s superiority, at least from D’Angelo’s perspective. D’Angelo receives one last insult at the end when he hastily takes a piece of chocolate cake off of a cart and hands it to Donette, only to have the waiter take it back and, in a perceptibly annoyed voice, inform D’Angelo that this is only the sample tray.

It is a painful scene to watch, because we sense just how out of place D’Angelo feels in this restaurant. Each misstep reveals how ignorant he is of this world, how unaccustomed he is to the rules and etiquette of fine dining (this idea gets played out in an even more pronounced way in the equally-devastating restaurant scene from Season 4). The restaurant’s staff remain polite and patient on the outside, and it is almost impossible to tell if their cold, condescending tone is really there, or if it exists only in D’Angelo’s imagination. In a way, their professional tone enhances the sting of their rebukes. More importantly, it shows how little experience D’Angelo has in restaurants like these. He wants to belong, but he feels like a phony.

This sense of being an imposter is heightened by an even deeper, more self-imposed insult that runs throughout the scene. As shown through a series of quick pans scattered throughout the dinner, we see D’Angelo constantly, uneasily looking at the other patrons. In fact, there is only one moment in the entire sequence when D’Angelo looks happy; when Donette talks about how good the shrimp was. D’Angelo agrees and says “yeah, it was good, right?” and smiles, but the very next shot is another glance at the other patrons. It is as if his subconscious will not allow him to get comfortable. The second he starts to enjoy himself, he has to look around to remind himself that he doesn’t belong.

But what does he see when he looks around? For one, he sees that all of the men are better dressed, wearing suits and ties to his turtleneck. But beyond that, he takes in the atmosphere of the restaurant and sees a world that will never be his. He hears the murmur of the casual conversation, the clinking of glasses, the Beethoven sonata played on the piano. He imagines that the other patrons all look at him disapprovingly. “Think they know?” he asks Donette, “you know, what I’m about?” But what his glances around the restaurant reveal is something far worse. They don’t even notice him.

D’Angelo’s unease clashes with Donette’s acceptance of the evening’s glamour at face value. She gets a little annoyed that D’Angelo doesn’t push for another table, but beyond that, she seems perfectly happy to take advantage of everything the fine dining experience (and her boyfriend’s profitable drug dealing) has to offer. She responds to D’Angelo’s question about the other patrons by observing that they are not the only black people there. It is a naive simplification. What D’Angelo feels goes deeper than race.

D’Angelo tries to explain. “Come on, you know, it’s like we get all dressed up, right? Come all the way across town. Fancy place like this. After we finished, we gonna go down to the harbor, walk around a little bit, you know? Acting like we belong down here, know what I’m saying?” D’Angelo feels like he and Donnette are fakes. They get dressed up in costumes and act like normal civilians, regular people who can enjoy a nice Friday night at the Inner Harbor. Donette gives a logical response. “So? Your money good, right?” And she is right. When D’Angelo talks about “belonging,” he seems to think that there is a club. For Donette, the only requirement for entry is money, but that doesn’t help D’Angelo. He has already excluded himself, regardless of his money.

Whatever trait enables Donette to feel like she deserves this night is completely lacking in D’Angelo. She speaks for Gatsby’s version of the American Dream when she says “Boy, don’t nobody give a damn about you or your story. You got money, you get to be whatever you say you are. That’s the way it is.” In her version of the world, the money is all you need to justify the act. D’Angelo can’t escape the deeper reality.

There is an interesting parallel here, and it is hinted at by the setting and D’Angelo’s mention of the walk around the Harbor. What D’Angelo feels is a miniature version of the city of Baltimore as a whole, as well as all impoverished cities that select small regions to show off to the world at large. Here they are in beautiful Baltimore, the place where tourists feel safe, where they walk around after Orioles games and visits to the Aquarium, where they eat crab cakes from McCormick and Schmicks and ice cream from Cold Stone. But after their walk, D’Angelo and Donette will go back across town to the part of Baltimore that remains hidden to the Harbor world.

Donette has a naive belief in the power of money to rewrite a story and recreate a person, but she never says for how long. Many people can scratch together enough money to enjoy a dinner like this, but what happens the next day? Americans pour billions of dollars a year into maintaining such illusions. You don’t need to look any farther than the very existence of Las Vegas, where tourists come to feel like celebrities and billionaires for a few days, before that sobering flight back to reality. In Donette’s version, that peak is enough, no matter how brief.

In fact, the only time Donette really looks uncomfortable with this conversation is when D’Angelo tries to verbalize his own discomfort. “I mean, what I’m talking about is about where we…” He can’t even finish the sentence. “Well, you know. I’m just saying, you know, I feel like some shit just stay with you, you know what I’m saying, like, hard as you try, you still can’t go nowhere, you know what I’m saying?”

It is a brilliantly unintelligible speech, and it contains the essence of the impossibility of resolving the two approaches to living. D’Angelo can’t escape his past, and he feels stuck with everything in his life, from the money on down to the drugs he sells to earn it. Donette lives in the moment, content to pretend, confident that the pretence creates a reality. But in this speech, and the entire after-dinner conversation, we see D’Angelo’s biggest failure–his inability to communicate his doubts. By my count, he says “you know,” “I’m saying,” and “I mean” eleven times. As out of place as he feels in the world of the Harbor, it is his inability to communicate that feeling to the people in his own world that really isolates him.

So he beats on…