We creep back in there…”–Bubbles

Now that Omar’s crew has been torn apart by the vengeful Barksdales, the title of most feared stickup crew in the Westside falls to Bubbles’ ragtag group of friends. It’s a long fall. Instead of Omar, Brandon and Bailey, we now have Bubbles, Johnny, and a third fiend with the onomatopoetic name of Uck. Instead of shotguns, their weapons are a shopping cart and a colostomy bag. Instead of making off with multiple G-packs, they are happy to net a few vials. But as low-bottom as this crew is, it does have two things in common with Omar’s: they rely on a plan, and they reveal the constant flow of product and manpower that moves in and out of the street. 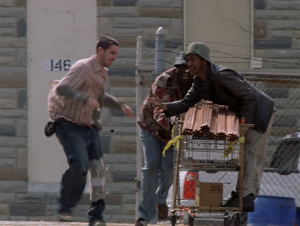 It begins with Johnny, outside for the first time since the savage beating the Pit boys put on him in the first episode (it is a sign of how patient and realistic The Wire is that it took a full five episodes and months of recovery time before he returns–in many shows, a victimized character will fully recover from even the worst traumas in two or three episodes). Johnny, the self-appointed “Viking” is back with a vengeance. A lot has changed since he botched the counterfeit money trick in the Pit. He is no longer “green,” as Bubbles called him in that first episode. Now, he is thoroughly “brown,” with a new haircut, a colostomy bag, and an HIV diagnosis. He also has a plan.

He shows up, trailing Uck and a shopping cart behind him. The find Bubbles working at a horse-drawn fruit cart. “What’s the game?” Johnny asks, a little disappointed to see Bubbles working a real job, “where’s the scam out here?” He is almost offended at the sight of a seasoned fiend doing legitimate work. Bubbles respond like a wise elder. “Honest day’s work for an honest day’s pay.” He adds, “gotta give a little something back when they least expect it.” Bubbles use of the phrase “giving back” shows that in his world, legitimate work is considered charity. This line is doubly comical because even as Bubbles talks about giving back, Johnny and Uck steal piece after piece of fruit off of the cart and load them onto their shopping cart. Call it WholeFoods for dopefiends.

Right away, there is a sense of giving and take, of things moving in and out. Bubbles start the day by giving back and then checks himself out of his job to join his buddy, fresh out of the hospital, in a plan to take even more.

As with Omar, Johnny shows how a plan can circumvent all of the traditional defences against theft and crime. “All that time I was resting, it got me thinking. It got good to me, too.” Johnny describes his time in the hospital as a sort of reverse spiritual rebirth. Rather than inspiring him to rethink the course of his life, the beating drove him deeper into the world of the fiend. And as a born-again fiend, he goes to one of the most reliable sources of all fiend-wealth: the copper house.

In The Corner, Simon and Burns present copper as one of the most common and profitable capers for the fiends. It is the one valuable element that is abundant in the projects, as long as the fiends are willing to slip into the basement of an unoccupied (sometimes occupied) house to get it. It is a conduit for plumbing, a medium that carries the essential element of water into and out of the houses. There will always be a market for copper tubing, especially with the developers who rebuild a shattered city. They know where the copper comes from, but they are all too happy to buy it (at a steep discount, of course).

One More scene at The Meaning of Brandon’s Profanity

To mark his triumphant return to the projects, Johnny is thinking big. He wants to go right to the source of the copper: the copper house. “What about the fence?” a dubious Bubbles asks. “Fuck the fence,” Johnny answers. “What about the dog?” “Fuck the dog.” And so they put their plan into motion. The first shot shows the same security measures Bubble mentioned, the defences put into place to deter theft. First, there is the security-camera perspective (already a staple of The Wire) that begins tne. In that black and white view, we see the fence and a patrolling guard with a dog. Then a truck leaves, loaded with bundles of the piping.

The plan goes down exactly as planned. Bubbles and Uck signal to Johnny, who waits for the truck to make a turn. Johnny hobbles out in front of the truck, lets it hit him, and drops to the street, moaning and writhing in mock-agony. The driver panics. He is not sure if he should yell at his victim or feel bad about hitting him, not sure if the best way to help is to stay or go. Johnny distracts the driver as Bubbles and Uck sneak up to the back of the truck and transfer the precious copper pipes to the shopping cart (which the crafty fiends rigged with cardboard tubes to hold all of those bundles into place). When the driver is about to go for help, Johnny rips open his colostomy bag to simulate horrific wounds. (“Onion soup, Campbells!” he later tells Bubbles)  Finally, the driver goes one way for help, and the three friends run the other way with their haul, Johnny ecstatically limping and boasting “yeah, my plan!”

They are victorious, but this theft is only half of the plan. Now they need to sell off the copper, and this is where they hit a snag. We see them at a construction site, where a contractor rebuilds a few of Baltimore’s many vacant houses. This is our first glimpse into the construction business that will become central in the later seasons of the show. It also reflects the building metaphor that Freamon and McNulty use whenever talking about the case.

Bubbles ask for 40 cents afoot, but the developer rejects that. As leverage, the man reminds Bubbles that he knows that the copper is stolen. The developer has no problem taking the stolen copper, but he happily uses that fact to drive down the price. Bubbles try ethical appeal. “35 cents afoot, and that all, that all in respect I have for y’all and what y’all trying to do in our community, with these quality domiciles here.” Bubbles once again describe himself as a charitable benefactor, willing to sacrifice his own needs by cutting the developer a deal that will help contribute to the broader growth of Baltimore. Of course, Bubbles has this completely backwards. After all, the copper that he stole had a destination as well; if not for these “quality domiciles,” then somewhere else on the Westside. The contractor says “30 cents a foot, take it or leave it,” and of course, the hungry fiends take it.

The sequence ends with the three fiends celebrating their score by shooting up in a domicile that is decidedly not-quality. From the outside, it looks like it could be the same vacant that Wallace and his makeshift family occupy, but a look inside reveals even more filth and squalor. Johnny once again boasts “my plan, Bubbs,” and Bubbles gives him credit, half bowing and declaring “this here white boy day!”

Then Bubbles proposes a plan of his own. “We’re gonna wait for that cheap-ass speculating motherfucker to put that good copper line back into them rowhouses he’s fixng up, and then, before the drywall go up, we creep back in there and steal that shit right back.” It is a perfect plan, in theory, one that not only pays the contractor back for lowballing them, but also gives them a second score on the same batch of copper. Theoretically, this cycle could continue: Bubbles and crew take that twice-stolen copper to another contractor (maybe the same one who was supposed to receive that original shipment from the copper house), and then another set of fiends goes in and takes that copper for their own score, and so on to infinity.

This is the true flow of energy in the projects. Just as Omar steals from the Barksdales and redistributes the drugs in a different part of town, Bubbles and his crew merely push around the same material from place to place, skimming just enough on each transfer to get their daily blast. The problem is, as the copper goes in and out of the buildings, and the syringes go in and out of their veins, something is always lost. This is a perfect model of urban entropy, where each transfer leads to a minute, immediate growth but a far more devastating longer-term loss: the loss of health, money, material and community. The only ones who gain are the ones who are on the other end of the transaction, the developers who get paid no matter where the copper comes from, and the drug lords collecting money $10 at a time and shipping it off to that giant safe in the corner of the kingpin’s office.

At the end of the episode, equilibrium claims its due. Bubbles wakes from a hard-earned stupor to the sound of shouting in the street below. He goes to the broken window and sees his partner face down on the ground, complaining that the cops are harassing him because he is white. “That boy ain’t got no luck,” Bubbles says sadly. Johnny, who was so proud to be out, ends up right back in. It is white boy day no longer.