The police are a drug kingpin’s primary natural enemy. They are the ones who are most likely to topple his empire, putting him away for decades or even life. The Wire supports this notion by focusing on Daniels’ detail and their attempt to take down the Barksdale crew. But after the introduction of Omar’s small, tightly-formed three-man crew in “The Buys,” the Barksdales are forced to fight on a second front, one that exists on their own side of the legal divide.

“The Buys” builds up to Omar’s dramatic raid on the low-rises, followed by the significantly-less-successful police raid the next day. “Old Cases” follows the aftermath of these two attacks. I discussed the consequences of the raid from the police perspective in my piece from last Saturday. But since Avon’s crew and Omar’s crew have fundamental similarities in terms of their criminality, we can learn a lot about the two rival criminal organizations from the way they respond to the raids. 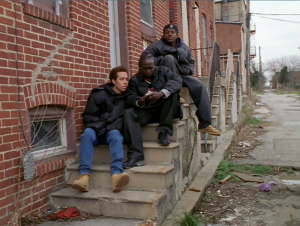 The structure of “Old Cases” invites such a comparison, since the episode since the leaders of the crews only gets one scene each, and the scenes are so close together. The first scene comes as we watch Kima on a futile search for the van that master-snitch Bubbles spotted fleeing from the heist. The camera slyly cuts to show us what Kima cannot find: the white van and its stolen plate (115 AAA). As the camera pulls a little to the left, it reveals Omar’s crew sitting on the steps of a vacant home.

As with our first look at Omar’s crew in “The Buys,” they once again appear in a tight formation, squeezed onto a small stoop, and yet they seem to be more comfortable because of that closeness. This time, Omar is in the middle, with Brandon on the step below him leaning on his leg, and Bailey sitting above him. Omar counts the money they made from selling off Avon’s package. “Avon’s stuff always be good,” Omar gloats, revealing the fact that this is not the first time he has hit the king. This also shows his motivation for taking on such a dangerous crew–Avon’s drugs sell the best. We also get a glimpse of what Omar does with the drugs he steals. He sells them off in a remote corner of the city (with the assistance of a boy named Mike who can’t be more than eight or nine years old).

This scene is partially a reflection on how the previous raid went, and partially a planning session for the next one. Their next raid will be the “flush and run” that will open the next episode. Omar decides to hit an Eastside crew “till things cool a mite,” showing his caution and his instinct for when to attack and when to lay low.

Reflecting on the previous heist, Omar chides Brandon for calling out his name. Omar doesn’t berate him, though (although he does describe the “play” as “a little raggedy,” the same word he used about D’Angelo’s crew when scoping out the Pit). Instead, he says “I don’t care you shouted me out. Everybody in these projects been knowing Omar, you heard? I just don’t want them coming down on y’all, baby boy.” Omar cares less about himself than he cares about protecting Brandon. Omar then kisses Brandon tenderly, revealing both his homosexuality and his relationship with his young sidekick.

This is a personal moment, one more familial than businesslike. Even Bailey’s response seems to show this. He smiles and shakes his head a little. He looks uncomfortable with his partners’ relationship, and yet, he also seems touched by the affection. In fact, Omar seems to be driven less by a desire for money than by a desire to live as a family. Along with his love and concern for Brandon, he also shows a paternal instinct towards Bailey, to whom he offers a home for the night. When Bailey declines, Omar warns him to “keep it close” and warmly places his hand on Bailey’s shoulder. Once again, Bailey almost recoils in instinctive homophobia, and yet he stays and listens out of respect and warmth for Omar.

Read This Scene: The Man of the Vacant House

But Omar’s sense of familial responsibility doesn’t just extend to his partners. When a friend named Shirley approaches “with her game,” begging for a free blast while holding a baby in her shaking arms, Omar tenderly caresses the son with a fatherly regard before ordering young Mike to “hook a sister up.” Omar’s isn’t looking to turn a profit or to take over the territory. Instead, he wants to build a community in a place where there is so little to tie people together. He protects these people (even if you can question the ethics of giving young mother drugs), and when the time comes, these people will protect him too.

After a short intervening scene between McNulty and Kima, we drop in on the big Barksdale crew, the Amazon to Omar’s used book store. The scene begins with the swish of a basketball through a hoop, and we drop in on what seems to be a combination workout and strategy session. Avon holds court, literally, surrounded by his inner circle, Stringer, Wee-Bey, and Stinkum. Unlike the earlier scene, this is a safe, sheltered indoor space, and yet one where the physical separation of the characters shows a more formal distance between the executives.

Avon stands at the free-throw line, palming the ball as he describes a disturbing revenge fantasy. “You know how these cracker motherfuckers do? When they kill a deer? Or like when they go out killing animals and whatnot? Get them on the front of the truck, tied up, stretched out so everybody could see it?” The message is clear. The stickup crew is the prey, and the Barksdales are the predators out on the hunt.

The rest of the crew laughs at the apparent excess of the description, but Avon stands firm. “I’m serious. That’s what I want. I want that motherfucker on display. I’m going to send a message to the courtyard about this motherfucker so people know we ain’t playing.” This is not about money. $20,000 is nothing to Avon. It is about the Game. As with the murder of Gant, Avon feels the need to maintain a fierce, unyielding control over the subjects of his domain, and the way to do that is to “send a message” through an overt public display of violence.

This also explains Avon’s reaction when he learns from Stinkum and Wee-Bey that Omar is gay. Stringer is almost impressed (“so he got a lot of heart for a cocksucker”) but Avon raises the bounty. It is a simple equation. If Omar gets away with stealing Avon’s stash, then Omar has the upper hand. Avon can’t even admit out loud what he thinks it says about him if people perceive that he has been played by a homosexual. This idea disturbs Avon enough to make him miss the shot he takes (it is interesting that both Avon and Burrell talk of “sending a message” in this episode, and both miss shots–basketball and golf). This is no longer a business decision. It is an emotional one.

The problem is that, while both Avon and Omar operate on emotional impulses, they are such opposing types of emotion. Avon acts out of fear and is protective of his image above all else. As a result, he treats everybody according to how he sees them reflecting his image. We see this at the end of the scene, where Avon and Stringer discuss the problems they have been having in the Pit. Avon says “take care of all that,” giving Stringer the go-ahead to start starving out the low-level hoppers in D’Angelo’s employ. He is willing to intimidate and terrorize everybody, friend and enemy, to preserve his status as unquestioned king.

Omar, on the other hand, brings people towards him. He is able to create a much smaller, more intimate world, one that can be ruled with compassion and not with fear. This may be based on Omar’s character, but it is also based on economics. The larger a corporation gets, the more insignificant and faceless its employees and customers become. It is a small company that has the best chance to know everybody by name, even if their profits will never compete with the big boys.

Perhaps the real reason Avon is so threatened by Omar is that the community he creates suggests a completely different way of doing business in the projects. Both Avon and Omar rely on violence and exploit the despair of drug addiction in the projects. But Omar suggests the possibility of at least sustaining a semblance of the community as he runs his business. Avon himself may long for this type of community, as shown through his constant talk of the importance of family, as well as the scene-ending alley-oop he throws down on an assist from Stringer. He needs people close to him just as much as Omar or anybody else, but the size of his empire won’t allow it. Avon is still the king, and as such, he knows that any suggestion of a different way of doing things is a threat to his reign, and so it must be violently put down.