If the first four episodes of The Wire are intentionally stingy with details on Avon’s personal life, “The Pager” lets it all out. First, there is the opening scene which portrays Avon as a prisoner of his own paranoia. Then, near the end of the episode, we get a rare glimpse into the Kingpin’s psyche. What we see is a chilling portrait of the deeply-rooted existential crisis that dominates his life. 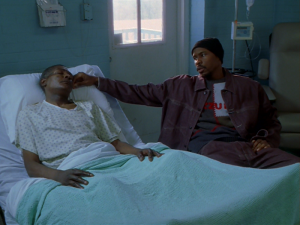 The scene is enigmatic and disturbing. The opening shot shows three men walking into an immense aging institution with an ominous “Do not enter” sign placed to the far right of the frame. The next shot names the place: Maryland State Rehabilitation Center. When we cut inside, we see Avon walking next to D’Angelo with an out-of-place Stinkum trailing silently behind.

As they walk down the hall, D’Angelo casts nervous glances at the patients. We learn more about the reason for their visit from the conversation between uncle and nephew. They are here to visit a relative, presumably Avon’s older brother. Avon scolds D’Angelo for never visiting, using the occasion as yet another opportunity to lecture his nephew on the value of family. “Family is what counts,” he says, “Family is what it’s about. The family will always be there because of it’s blood.” Circular reasoning aside, Avon’s focus on family feels a little self-serving. If D’Angelo won’t visit this uncle, he seems to ask, what would happen if his other uncle ends up here? On the other hand, Avon is clearly dedicated to visiting his brother, so his belief in the family seems genuine.

We learn that there is some conflict within the family about where this uncle should stay. D’Angelo’s mother, the yet-to-be-introduced Brianna, “keep ragging” at Avon to move their brother to a private nursing home. “I keep telling her, man, we can’t show this legit money yet, man, especially since he ain’t got no insurance. Soon, though, soon.” It is all the more frustrating because the siblings know that Avon has the money to make the move, but legal issues make it impossible to use that money.

It is a maddening circumstance for all involved. No matter how much money Avon takes out of that giant safe every day, none of it is his to spend. His is wealthy in reality, but he is poor on paper, so his brother remains trapped in the sterile netherworld of a state-run mental facility.

It gets worse when we finally see the uncle. We look through D’Angelo’s eyes at the screaming, twitching, rocking inmates (one who vaguely looks like Johnny and another whose hair resembles Orlando’s), but when they reach the uncle, he lies motionless in a bed. His stillness is unsettling. He is in a vegetative state, trapped in a stasis between life and death. He never moves a muscle. We don’t even get his name. It no longer matters.

Avon pulls up a cold steel chair, fidgets with his hands for a few seconds, and then sits down and softly caresses his brother’s cheek. It is a surprising moment of warmth, one that mirrors the way Omar caressed the Shirley’s baby in the previous episode. Then, Avon begins what is probably his most powerful monologue in the show. Avon addresses a few lines directly to his brother, but his real audience is D’Angelo, who stands back defensively, a few feet away from the bed (Stinkum seems to have disappeared completely).

“You never figured on this did you?” Avon asks his unresponsive brother. Then he looks at D’Angelo, gestures towards the body cot and proclaims “‘Live the life, lead the life. Ain’t no big thing.’ He used to talk that shit all the time and he believed it, you know what I’m saying?” Suddenly he turns back to the body. “What’s up baby, talk that shit now.” In these few lines, we experience a fascinating range of emotions, from awe, to objective commentary, to sibling trash talk. It is clear that the emotional complexity of this fraternal relationship hasn’t abated, even with one brother comatose.

In fact, if anything, the rivalry may have deepened. If the brother was a gangster, then he must have been a role model to the fatherless Avon. This is the man who initiated Avon into “the life.” Avon is now the King of that life, success in the eyes of the brother (even if the brother can’t process that success). Yet the very use of the word “life” is part of what haunts present-day Avon.

The rest of the speech makes this clear. “He scares me,” Avon admits as he pats the brother’s hand. How could it not. After all, if his brother ended up in a place like this, then so can Avon. “See, the thing is, you only got to fuck up once. Be a little slow, be a little late, just once. And how you ain’t gonna never be slow, never be late? You can’t plan for no shit like this, man. It’s life.”

Here, we get a clearer explanation of the paranoia that dogs Avon from morning to night, from his unsettling homeless wakeup routine to his compulsive glances at the surveillance monitor in Orlando’s. While his obsessively-cautious behavior shows how hard he tries to resist this fate, he is always aware that he can never be careful enough. “Life” will find a way to catch up to even the most cautious of gangsters.

And there we go again with that word: “Life.” It is a force that can’t be escaped, can’t be planned around (even if a planner like Omar might disagree). Life is uncontrollable and chaotic, and no matter how fast and on time you are, life will always throw something at you that you can’t “count on.” The problem with this formulation is that it frames “life” as the enemy.

And this is what Avon really sees and fears when he looks at his brother: not his future, but his present. Throughout the speech, Avon is framed with the brother’s IV drip around his head, suggesting that he too exists in a sort of vegetative state. He has money, but he can’t spend it. He has many girlfriends but no home. He has power and territory, but he is always afraid of the police and the stickup crews attracted by them. Just like the body sitting motionless and silently before him, Avon is permanently trapped somewhere between life and death.

If there is any hope for him, it lies in the one place we should be able to go for consistency: Family. This explains why he always talks about the importance of family. If the unpredictable life is a threat, then we need stability. But this sucks him right back down into the paradox. If family is life, then family, like life, is also unreliable. That may be why much of this scene seems to be an emotional appeal to D’Angelo. Avon wants to scare his nephew because he needs to feel that somebody will still be there to visit him some day, should he ever end up in an institution like this.

The speech ends with Avon admitting “yeah, he scares me.” After all this years, his older brother still has power over him. Avon reaches over and touches a large round scar on his brother’s temple. A bullet hole. Maybe Avon is images a second bullet out there, one destined for his own head. And how can anybody plan for that?